Copyright © I Am East St. Louis, The Magazine  |  All Rights Reserved 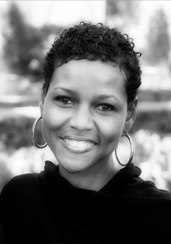 Charmaine was born and raised in East St. Louis, IL where she graduated from Lincoln Sr. High School in 1985.  She earned a Bachelor of Business Administration Degree from McKendree College and a Master of Arts in Management from Webster University.

Charmaine is a retired U.S. Navy Commander (O-5).  She served on active duty as a Human Resources Officer for 21 years, during which she deployed to Baghdad, Iraq for 11 months in support of Operation IRAQI FREEDOM.  Her military awards and decorations include the Bronze Star Medal, Defense Meritorious Service Medal, Iraqi Campaign Medal and numerous Navy Service medals, awards and unit commendations.

After retiring from the Navy in 2010, Charmaine accepted a Navy civil service assignment at Naval Special Warfare Command (NSWC), headquarters for the U.S. Navy SEALs, in San Diego, CA.  In her position as the Military Personnel (Human Resources) Officer (GS-14), she developed innovative products and metrics leading to significant cost-savings, greater transparency, and improved responsiveness in military human resources programs.  During her tenure, she earned the Navy Superior Civilian Service Award, the second highest honorary award under the Department of Navy Civilian Awards Program.

Charmaine is a Director of the Board of Directors of Protestant Memorial Medical Center, Inc. She and her husband Lorenzo D. Savage, Sr. relocated to East St. Louis in 2014. They have two adult children and a granddaughter who all live in San Diego, CA.

About the Founder/
Editor-In-Chief